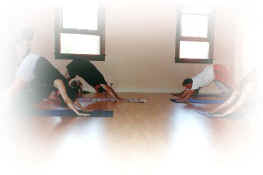 Historically, Ashtanga means "eight limbs" and refers to a life practice of 8 parts, 2 of which make up a physical practice:  asana (postures) and pranayama (breath control).  The other 6 limbs deal with clean living, and meditative techniques and results.  These 8 limbs were first described in the Yoga Sutras of Patanjali, dated around 2000 years ago.

The hatha yoga which we now refer to as Ashtanga is named after this ancient system and has been in roughly its present form since at least the early 1900s in the practice and teachings of Tirumulai Krishnamacharya.  It is based in part on an ancient Sanskrit document Krishnamacharya sought and found in a Calcutta library on his teacher's suggestion.  This legendary document, the Yoga Karunta, attributed to the rishi Vamana and no longer extant, was possibly dated from the same period as the Yoga Sutras and is thought by some to be the original hatha yoga referenced by them.  This text described breath by breath the practice which Krishnamacharya taught to Sri K. Pattabhi Jois.  In the 1960s the first western students sought out Pattabhi Jois who had been teaching Ashtanga out his Ashtanga Yoga Research Institute at his home in Mysore, India, since 1948.  Since then he has taught this system to countless students who have travelled to Mysore, to thousands more by travelling around the world. Although Guruji has now passed on, his grandson Sharath Rangaswamy continues his teachings from Gokulam, the suburb of Mysore where he now resides.

Differing from many other yoga styles presented in the West, Ashtanga Yoga is not a led yoga-based workout or exercise class, but a whole yoga system, which you are meant to apply yourself to and work at daily. Ashtanga is intended to be learned and committed to memory posture by posture, and breath by breath (see Mysore-style.) The Primary Series, where you begin, is the first of several series of postures (asanas) linked with precise breath-synchronized movements (vinyasa.)

Daily practice always begins with practice of surya namaskara (sun salutations) and ends with a sequence of inverted and meditative postures.  Between these two sequences you are gradually learning and mastering a series of postures which grow more challenging as your practice progresses.  In the first class you attend, you will learn the sun salutations and closing postures.  As you become, steady, comfortable and proficient in your practice, the postures and movements in the system are taught one by one as you are able to accomplish them. This is an individual and ongoing learning process that takes place cumulatively over time. Full practice is six days a week with moon days and the heaviest days of menstruation off.

Ashtanga Yoga is one of the most challenging forms of hatha yoga yet it starts out gradually, is suitable for the complete beginner, and progresses at the pace of each individual. Regular practice can result in physical strength, flexibility and balance, improved cardiovascular health, an increased ability to focus, and a steadier mind and spirit. Designed for the long run, this practice can continue to transform and inspire you throughout a lifetime.