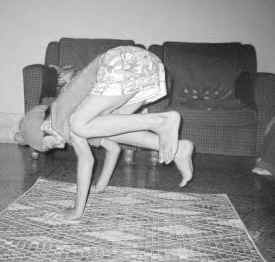 Vinyasa, in Sanskrit, means putting together, or connecting.   In terms of Ashtanga yoga practice, this refers to the synchronizing of movement with breath, of practicing a breathing/movement system.   We speak of a particular movement synchronized with either an inhale or an exhale as "a vinyasa."   We also speak of a series of such movements between asanas (postures) as "a vinyasa."   "Full vinyasa" means coming all the way to samastitihi (standing) between asanas (postures) using the full series of vinyasas (basically one surya namaskara A) between each asana.  "Half vinyasa" refers to a certain portion of the full vinyasa practiced between asanas and between left and sides of each asana.  Everyday practice incorporates half vinyasa.

"The concept that guides the performance of an asana and also the course of practice is called vinyasa.  It means step-by-step, a progression that has a beginning, middle, and end.  When applied to a particular posture, vinyasa begins with visualization, proceeds to the starting position and the incorporation of the breath into the movement.  The asana is performed with concentration on the flow of the movement and smoothness of inhalation, exhalation, and toward the prescribed completion.  Each step is a preparation for the next.  And so it is with the sequence of asanas.

"Vinyasa is, I believe, one of the richest concepts to emerge from Yoga for the successful conduct of our actions and relationships.  My father's students were often amazed that he would greet them at the gate when they arived, conduct the lessons, and then escort them back to the gate and bid them farewell.  Often, a student considers it a somewhat elaborate courtesy, but it is actually vinyasa.  Our time together begins with their arrival and draws to a close with the departure.  Vinyasa grants both teacher and student a sense of completion that is also a preparation for the next phase of our life.    For me, perhaps, it as the arrival of another student; for the student it might be time to start thinking about an appointment, or returning to family chores or a job.

"In vinyasa, the ending of a progression takes on deep meaning.  Vinyasa is in itself a form of self-study that engages attention upon the consequences of our actions.  When we devote all of our concentration, energy, and time to a special work project, we must know how to bring it to a close and resume the normal rhythms of work and family life."

This is taken from Health, Healing & Beyond:  Yoga & the Living Tradition of Krishnamacharya (teacher of K. Pattabhi Jois), by Krishnamachary's son, T.K.V. Desikachar.  This is a beautiful book.

In the Ashtanga Primary Series, each movement and each breath is accounted for from the beginning to the end of the practice.  There is a definitive counting system in which each vinyasa has a number, and each asana has a definite number of specific vinyasas that are a part of its performance.  It is the vinyasa system which gives Ashtanga Yoga its strength and effect.  You should be learning very precise vinyasas in your Ashtanga class, but as an additional/backup reference, study Lino Miele's book, Astanga Yoga.    Sometimes additional helpful stretches and exercises are incorporated into everyday practice that are not officially a part of the Series.  It's fine to do these additional stretches when appropriate, but you should be aware when you are practicing these and when you are practicing the precise vinyasas of the Primary Series.